watching a diffraction pattern building up

The detector is in our case a 170 µm thin quartz plate at the end of the vacuum chamber. Here the molecules stick as soon as they land. In order to visualize the pattern the molecules are forming, we excited them electronically with laser light of a suitable color. The molecules absorb the light and re-emit it in the form of fluorescence photons. The re-emitted light is collected with a microscope objective and guided to a camera. 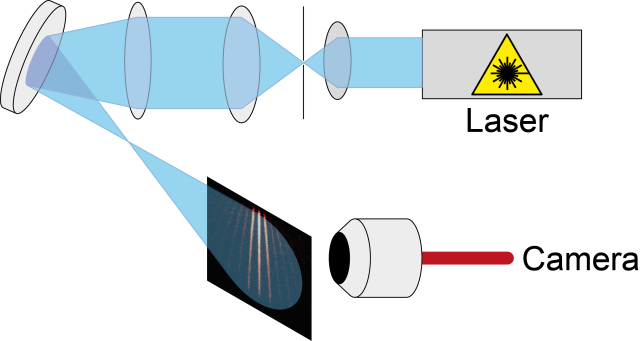 When we collect a large amount of light from each molecule on the quartz slide, we see every single one of them and can locate them very precisely. This can be nicely seen in the image below.

The fluorescence of dye molecules on a detector. Each dot corresponds to a single molecule emitting thousands of photons during the acquisition time of the image.

At a distance of 60 cm between the grating and the detector, the signal can be described by the simple diffraction formula

is the wavelength of the molecule, d is the period of the grating, and

is the diffraction angle.

In this picture, we get a number of individual diffraction orders, one for each value of n. The diffraction orders are evenly spaced and depend on the period of the grating, the distance to the detector, and the wavelength. As we will see, the last point is of particular importance.

The video shows how molecules reach the detector in an actual experiment. The organic dye molecules phthalocyanine is diffracted at a nanomechanical grating and each of them corresponds to a red glowing point as it emits light. As more and more molecules are accumulated, the distinct diffraction orders becomes clearly visible – the zeroth diffraction order in the middle, the + and – first orders next to it, and to on.

There is another interesting feature: The separation between the diffraction orders increases when we go from the top of the image to the bottom. The reason for this phenomenon is that the de Broglie wavelength

of a molecule depends on its velocity v.

with Planck’s constant h, and the mass of the molecule m.

The molecular source we are using evaporates molecules thermally. Hence, they do not all have the same velocity, but their velocities follow a Maxwell-Boltzmann distribution. Slow molecules do not reach the detector in a straight line but fall on a parabola due to gravity. At the same time, the wavelength of the slow molecules is larger than the one of the fast molecules. This increase is

leads to a wider separation of the diffraction peaks. 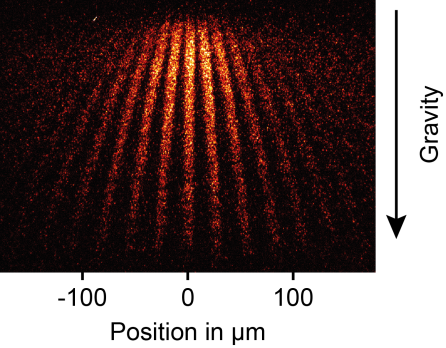 If the pattern at the detector was only a geometrical shadow of the grating, the diffraction order would be parallel. Hence, we can explain the experimental results only with diffraction. For this to happen, the molecules had to behave like a wave at the position of the grating. This proves the wave-nature of the investigated molecules.

From the analysis of the pattern, we can learn a lot about the interaction of the molecules with the grating material. This will be discussed for the individual publications in detail in the blog. 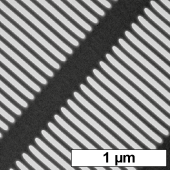