The field of matter-wave optics is based on the concept that matter like electrons, atoms, 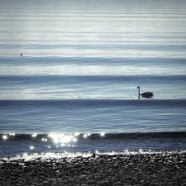 and molecules can be treated like waves rather than point-like particles under certain conditions. This seems to be quite a peculiar idea as these two descriptions do not match up really well. Particles have a well-defined position and extension. Waves, on the other hand, are extended over a certain area. Before we take a look at the trick that is needed to “delocalize” a particle, that is, treating it in a way so it behaves like a wave, we concentrate on good old waves themselves.

What is a wave?

A wave is a periodic movement in time and space. This means that when you take a look at the photo of waves surging at the beach above, you see the periodic pattern of the waves at a certain time, the time the photo was taken. It is also easy to observe the periodic movement in time. A rubber duck floating on the waves at a certain position moves up and down. This is also described by a periodic movement. The important parameters of a wave are its amplitude A (how high the rubber duck is lifted compared to a smooth sea) and the wavelength λ (the distance between two maxima of the wave in the photo).

How does a wave behave?

If waves do not come across an obstacle, they may just expand further and further. In case they reach a barrier with an opening much larger than the wavelength, we observe a geometrical shadow. The wave moves on like it did before in the region where it was not blocked.

However, as soon as the size of the opening becomes comparable to the wavelength λ, things start to get interesting. Now the waves reach regions outside of the geometrical shadow and spherical waves emerge. This effect is called diffraction and occurs always when we confine a wave to a small region compared to its wavelength. This effect does not only occur in such artificial settings as water tanks. As you can see, water waves in the ocean may also be diffracted at the opening defined by two rocks.

Diffraction of water waves at rocks at the shore. Image from misswise.weebly.com

In the last image, we can glimpse that the waves are also diffracted at another opening further to the left, as we see circular waves originating from over there. The pattern that forms behind two small openings is nicely shown in the following video. Instead of waves diffracting at two small openings they used two tips which they dipped into a water tank with the same frequency. The effect is the same: we get waves emerging from two small regions.

What we observe in the video is that there are regions where the surface of the water remains smooth all the time. Between these regions, there are parts in which the amplitude of the waves (the height of the waves) is much higher. This phenomenon is called interference. It is easy to understand when we add the waves originating from the two points. In the case of the smooth water region, the maxima of the one wave coincide with the minima of the other one. In sum, they perfectly cancel each other and the water remains calm. This is called destructive interference.

Constructive interference is just the opposite. The positions of the minima and maxima are perfectly matched and the effect is amplified. Hence, the amplitude of the wave is increased in this region.

The effect of interference can only be observed for waves. Hence, all matter-wave diffraction experiments use interference effects to prove the wave nature of matter. Only if the particles behave like waves, a pattern as shown in the last images emerges. In the next post we take a look at how such a feat is achieved for matter.