Science is not only about the big discoveries, but also about the little steps in between. And often it’s these small findings and gadgets, which allow you to make a leap forward. Our latest publications [1] is exactly about something like this: no scientific breakthrough, but a very handy tool.

In our current experiments, we are diffracting a beam of molecules at a standing light grating created by retro-reflecting a laser beam in high vacuum. This comes with a number of requirements: The two beams have to overlap optimally and you need to know the dimensions of the laser at the crossing point.

Reflecting a laser beam into itself generates a standing light wave close to the mirror. To understand the interaction of the molecules with this grating you need to know the intensity of the laser and its size.

Measuring the size of a laser beam is a task as old as the laser itself. Hence, there are numerous well-working solutions you can buy and integrate in your optical setup. The challenge that we faced was that we want to measure the beam width in a very confined environment (100 µm away from a mirror), under high vacuum while also aligning the laser to the molecular beam.

Our solution is to take an off-the-shelf optical multi-mode fiber and cut it, so you get a nice tip. Then you remove everything but the core and the cladding and move it at right angles into the laser beam. As soon as the tip enters the laser beam, light is scattered at the cut and transported via the fiber to the detector. From the amount of light detected as depending on the position of the tip, you can determine the position and the diameter of the laser beam. Surprisingly, the resolution that you can achieve with this simple device which compares well with commercial solutions. 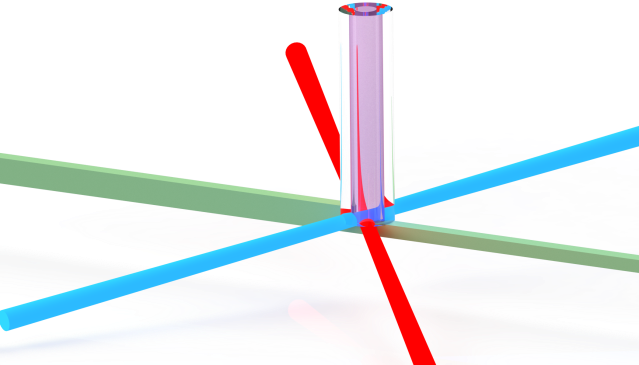 The fiber scatters both the blue and the red laser beams and guides the light to a detector at the other end of the fiber. At the same time it blocks part of the molecular beam (green) coming from the left. Thus, it can be used to align all three beams with respect to each other.

Moreover, the optical fiber can have a diameter well below a millimeter, can withstand high laser intensities and can be used to align laser and molecular beams from several direction at the same time. Hence, it’s a very handy device whenever have to measure a laser beam at a place that is particular hard to reach or rather cramped.