Separating molecules from one another is truly an everyday problem. Kidneys constantly remove toxins from the blood, saltwater is desalinated to produce drinkable water, and caffeine is extracted from coffee beans to ensure that you sleep tight tonight. Also in chemistry, the purification of molecules after synthesis is highly important to ensure that only the desired product is further processed.

While it seems rather obvious that two different molecules behave differently in a chemical reaction, even the chemical reactivity of one molecule is not always the same. This is often connected to its 3-dimensional structure. For example, once a protein gets too hot, it loses its natural folding structure, rendering it incapable of carrying out the task it was designed for. Also for small molecules the geometry can have a huge influence. In some cases, one structure has a high reactivity while another one does not react at all, as shown in Figure 1. 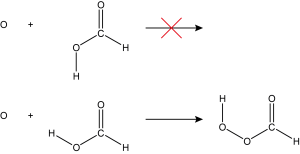 Figure 1 | Reaction of oxygen with formic acid. The orientation of the O-H bond determines whether the so-called Crigee intermediate is formed or not [1]. This reaction occurs constantly in the atmosphere, underlining the importance to understand the influence of structure on chemical reactions.

Hence, it is very important to study the effect of structure on chemical reactions. In order to do this, you have to separate the different geometries, called conformers, of a molecule. However, this is not an easy task. Small molecules change their structure in a split second at room temperature, making it hard to keep the structures for long. To circumvent this problem researcher came up with various solutions. One idea is to keep the molecules frozen in ice made of rare gas atoms or ultra-cold helium droplets. This way you can reach very low temperatures at which the change in geometry is frozen out while the rare gas atoms have only a minor effect on the embedded molecules. Another idea is to evaporate the molecules and expand them together with rare gas atoms through a tiny nozzle. Just as in the spray of an aerosol can, the molecules get cold. If the use enough pressure, the molecules can get so cold that they cannot change their geometry any longer.

The only question left now is how to isolate one geometry from all that are present in the sprayed beam. If the conformers differ in the magnitude of their electric dipole moment (the distribution of positive and negative charges within the molecule), they can be separated using electric fields [2]. This has very successfully been done for a number of molecules so far. However, the electric dipole moment may often be quite comparable for the different structure, making the separation challenging.

Figure 2 | The four experimentally observed conformers of the neurotransmitter 2-phenylethylamine differ only in the orientation of the amino group (NH2) [3]. The electric dipole moment of the conformers is virtually identical, making the isolation based on electric fields challenging.

In our study, we describe how matter-wave interference might overcome this limitation [4]. The basic idea is that each conformer absorbs light at slightly different colour in the ultraviolet. This is quite convenient as it allows us to address a single structure independently of their dipole moment. When we illuminate a conformer with UV light, whose colour is slightly off compared to the light which is absorbed, the interaction is determined by the optical polarizability as shown in Figure 3. If the polarizability is positive, the conformer is attracted by the laser beam, if the polarizability is negative, the molecule is pushed away from it. Close to a transition (where light is absorbed), the optical polarizability differs considerably from the mean value. Hence, all four conformers interact slightly different to light of a certain colour. 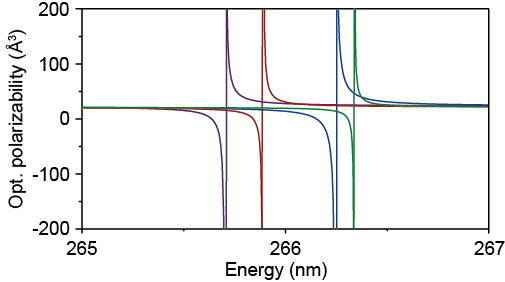 To exploit this interaction for diffraction, we consider a grating made of light. If the light is reflected into itself it creates a periodic structure: There are regions with high intensity (anti-nodes) and regions with no intensity (nodes), which is comparable to the slits and grating bars of a mechanical grating.

Figure 4 | Reflecting a laser beam into itself leads to a standing light grating. This is a pattern of regions with high and low intensity.

The resulting pattern after diffraction depends now critically on the subtle differences in the matter-wave-light interaction: one conformer might be strongly attracted by the light while another one does not interact at all with it. In Figure 5 the simulated diffraction pattern of the four conformers of 2-phenylethylamine (Figure 2) is shown. Although all conformers are diffracted at the same standing light grating, the diffraction patterns are not identical. This is due to the difference in optical polarizability. The most important features are the first diffraction orders connected by the grey stripes. For the gauche(out) conformer drawn in red, these diffraction orders are very intense, while they are suppressed for the other three conformers (violet, green, blue). If we select these orders by two slits, we can make sure that the resulting beam is populated mainly with the desired structure. 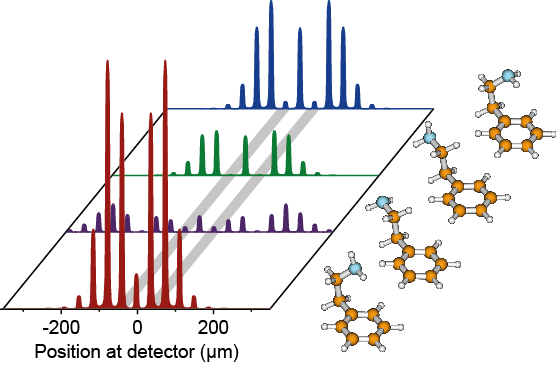 Once realized, the method will be instrumental for isolating single molecules structures for systems which have eluded conformer-isolation so far. This includes geometry-selected water clusters, hormones, and hydrocarbons. Such beams can be used to increase our knowledge of processes occurring in the atmosphere, in biology, or in space. Also for technologically relevant processes, such as catalysis, this is of high importance.